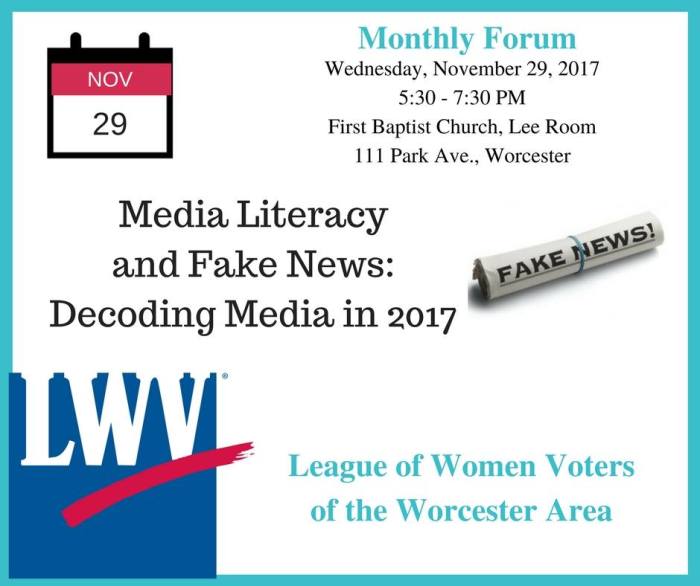 I am honored to join a panel of media and academic folks as we dive into the meaty subject of “Media Literacy and Fake News” on November 29 from 5:30-7:30 p.m. at the First Baptist Church in Worcester.

I’ll be appearing at the League of Women Voters of the Worcester Area’s “Decoding Media in 2017” forum alongside:

Image credit: League of Women Voters of the Worcester Area.

I went political with my latest column, this time for the Worcester Telegram & Gazette.

Entitled, “What are the consequences of misogyny,” my piece was written in the wake of the president’s tweets which personally attacked the physical appearance of a female cable journalist. This is hardly the first time the president has stooped to this level.

Overall, the column is a plea for honorable people across the political spectrum to hold the president accountable for his misogynistic behavior, and it also expresses a likely unfulfilled hope that there be actual consequences for treating half of the nation’s population like objects with which to play or ridicule.

… I see treatment of women as an issue that transcends party. It is about basic decency. People who respect women and don’t simply offer hollow lip-service to women’s equality, should condemn all sexually harassing and exploitative commentary and actions. If you are a harasser and/or a demeanor of women, you are a problem. It doesn’t matter if you’re a Democrat or a Republican or an Independent or if you work for the man. Full. Stop.

The Springfield (MA) newspaper, The Republican and its web presence, MassLive, wrote about me signing with Wyatt-MacKenzie to publish Mr. Clark’s Big Band in June 2017:

West Springfield native (and former staff member at The Republican) Meredith O’Brien will be out with her next book, Mr. Clark’s Big Band: A Year of Laughter, Tears & Jazz in a Middle School Band Room, next year.

Wyatt-MacKenzie Publishing has picked up the title for release in June. This is O’Brien’s third book, following her novel, Mortified, and her humor and parenting columns, Suburban Mom: Notes from the Asylum.

If you’re looking for information on Boston area writer and journalism educator Meredith O’Brien, you’ve come to the right place.

Please feel free to look through some of my articles, books and educational experiences.

I’ll be posting updates on my new publishing and teaching endeavors here as they occur.

Until then, I’m off to tend to my two bickering rescue dogs and getting ready for the next Red Sox season.

The main image for this web site is from the Hess Collection, of Leopoldo Maler’s burning typewriter. I have a thing for typewriters.